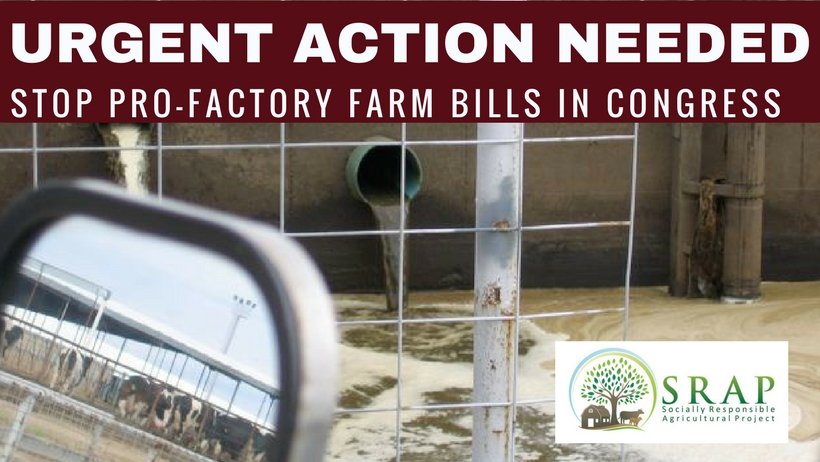 We need your help!

The Trump Administration and its allies in Congress are attempting to gut commonsense laws through S.2421 and H.R. 848.

S. 2421 will rewrite the rules so that factory farms ”can emit toxic air pollution without reporting what, or how much of it, is in the air and H.R. 848 would prohibit suits against factory farms by people who’ve had their drinking water wells contaminated.

You can find your House Member here and your Senator here. Once you know who your members of congress are you can call the Capitol Switch Board at (202) 224-3121 and ask to speak to their office.

The Comprehensive Environmental Response, Compensation, and Liability Act (CERCLA) and the Emergency Planning and Community Right-to-Know Act (EPCRA) take steps to address that pollution by notifying communities if and when they’re being exposed to dangerous levels of air pollution — so people may take steps to prevent exposure. These statutes also provide emergency responders with information vital to their response efforts.

S.2421 seeks to eliminate CERCLA and EPCRA reporting requirements for ammonia and hydrogen sulfide– gases that are dangerous or even toxic for people working on and living near factory farms. Exempting factory farms from these reporting responsibilities will put the health of rural communities at risk and limit the public’s ability to learn about the pollution these operations cause.

Call your Representative and urge them to vote no on H.R. 848, the Farm Regulatory Certainty Act, introduced by Rep. Dan Newhouse. H.R. 848 seeks to shield factory farms from lawsuits– even if they destroy drinking water supplies. This bill proposes getting rid of citizen’s ability to file lawsuits under the Resource Conservation and Recovery Act (RCRA) against factory farms that have polluted their drinking water. By scrapping this important citizen suit provision, this bill leaves rural Americans with no recourse if their drinking water is polluted by mismanagement of livestock waste on a factory farm.

The RCRA has been in place since 1976. The provision in the law that allows individual citizens to file lawsuits to enforce the law was recently used successfully as a last-ditch option for thousands of people in Yakima Valley, Washington, whose drinking water had been ruined by manure from a factory farm. Residents couldn’t drink, bathe in, or cook with their water. After a 15 year struggle it was through a citizen suit filed under RCRA that the companies were finally forced to prevent future pollution and provide hundreds of families with drinking water until their wells were restored.