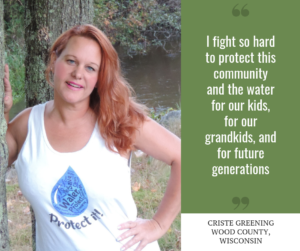 When Criste Greening looked for the right home for her family, she didn’t have to look far. She found it in Saratoga, Wisconsin — the small town where she grew up. Surrounded by forest and trails, and with a creek in the backyard, the house is reminiscent of Criste’s childhood home. And that was perfect. She wanted her kids to have the same kind of experience she had of growing up in a small rural community. Criste and her husband saw the town of 5,000 residents as the perfect place to raise their children.

Yet that sense of home all changed six years ago when Wysocki Farms decided that the unspoiled land of Saratoga was also the perfect place to locate another one of its industrial dairy operations. Criste remembers it like it was yesterday.

“My husband had come home and had heard an announcement at work about the CAFO (concentrated animal feeding operation). At the time, my children were fairly little and when I thought of a dairy farm I thought of cows and thought how cool would that be? I was so naive.”

That picturesque vision of an ‘Old McDonald’s Farm’ coming to their town disappeared quickly when Criste did her research and learned just how devastating CAFOs are to nearby communities. Criste also had to look no further than the adjoining county of Juneau, where Wysocki Farms already had a dairy CAFO operating. The town of Armenia there has been plagued by water contamination since Wysocki Farms opened the doors of Central Sands Dairy.

It was not a path any town would want to follow.

“Armenia is our looking glass into the future for what could happen here in Saratoga. We do not want our community to eventually be dealing with the same types of contamination they are facing out there.”

There was no leaving their home, their plans and their future, so opposing Wysocki Farms became the only option. Criste and fellow community members have been putting up a fight ever since, initially forming a group called Protect Wood County and Its Neighbors and now leading a more active and outspoken group called Saratoga Concerned. The local impacts were immediate and inspiring.

“Wysocki Farms had no idea of the backlash and fight they were about to start. They knew Saratoga was small and did not have a lot of resources. They did blindside us, but we blindsided them right back with hundreds of volunteers in the beginning. In the early years we submitted extensive amounts of paperwork and research to the DNR opposing the dairy. They had no idea what they were getting into.”

With her 15 years experience teaching special education for the Wisconsin public school system, Criste finds she is still educating – it’s just different people on a different subject in a different way.

“Our group is very public. We are always handing out flyers. You get people who say, ‘What is the big deal about a farm?’ We do everything possible to educate people that this mega-industrial complex is very different from the local family farm. It’s an ongoing battle of education.”

Criste and the members of Saratoga Concerned Group have put up an impressive fight and so far they have kept Wysocki Farms from breaking ground in their beloved community. But it has taken creativity, initiative and the commitment to attack the issue from all angles.

In 2014, Criste and fellow community members worked with the town board to add 10 additional monitoring wells to the town. They also constantly do community water testing events to document the condition of their residential private water wells. Keeping an updated baseline on water quality in Saratoga provides solid technical data that would make it easy to report negative impacts that a new CAFO would bring.

“Our biggest concern is water contamination. We just completed our fifth year of local stream-monitoring testing in over 10 different locations. We have a baseline like no other community across the state. If anything is going to win this battle, it’s going to be the database of info we created on how clean our water is.”

While the Saratoga Concerned Group has been successful in stopping Wysocki Farms from breaking ground, after six long years Criste knows the truth is you can’t get too comfortable. The effort to save her community, her family and everything she loves about Saratoga is something that has become part of her life. And without hesitation, she says the fight has been worth it.

“I fight so hard for our kids, for our grandkids, for future generations. I don’t want my kids surrounded by the air or drinking water that could become contaminated. We were here first. We have put everything into our home. Why do they get to come in and destroy our property values and everything we have put into our homes?

And even in the midst of what has been a long and difficult battle, one very good thing has come out of it.

“We have engaged a community who is no longer afraid to speak. They show up. That’s the most powerful thing we have been able to do as a group. When this all started this was a community of strangers. Now we are truly a community of family. You aren’t just making a difference for your own family, but for your community.”