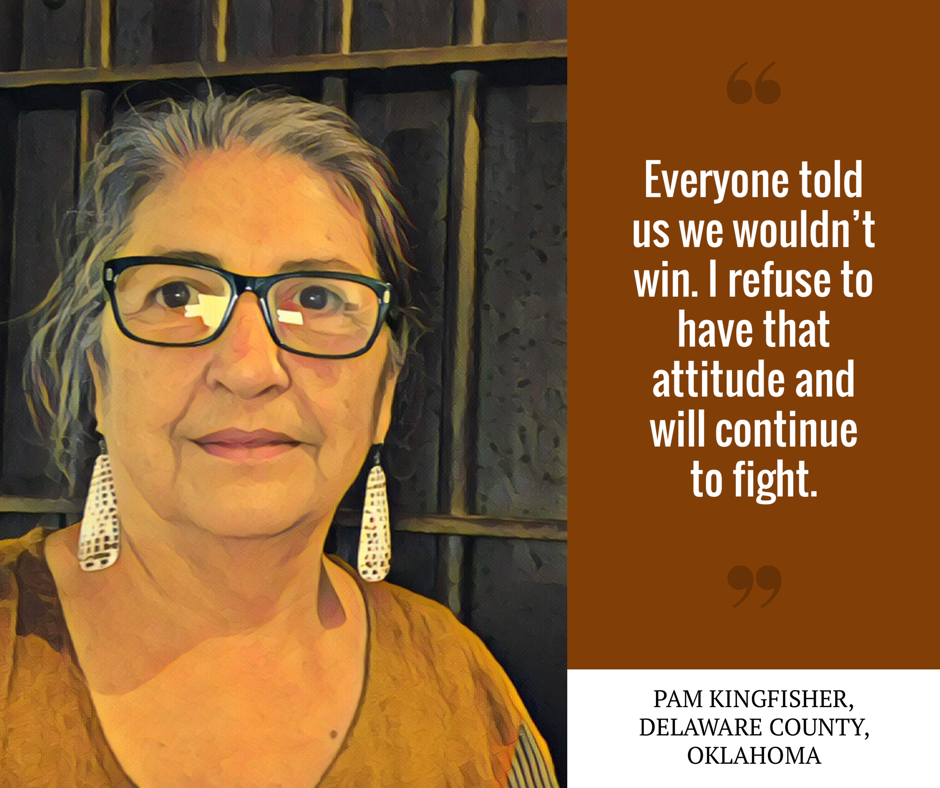 Delaware County, Oklahoma echoes with a painful history. The landscape still reverberates with the impact of the Trail of Tears – a shameful episode from the nation’s past when more than 20,000 members of the Cherokee tribe were forcibly marched 1,200 miles from their ancestral lands in the Southeastern U.S. to present-day Oklahoma. The harsh relocation took the lives of an estimated 4,000 Cherokee who marched in scant clothing, underfed and exposed to the elements in the dead of winter more than 180 years ago. Delaware County marks one of the historic ending points for the Trail of Tears.

It is now where Pam Kingfisher, 66, lives on her grandmother’s original allotment land in Cherokee County near the Delaware County line. These lands were distributed to Cherokee people in 1906 prior to Oklahoma statehood. One-half Cherokee herself, Pam knows and understands the history of this land, and the people who live on it.

“Most of us in Delaware County are a broad community of the Cherokee from the Trail of Tears descendants and we are all concerned about the same things.”

The land remains sacred to the descendants of the Cherokee who continue to live there. And yet near Spring Creek and a historic Cherokee cemetery known as God’s Acre, a factory farm was planned for this hallowed tribal land. The proposed poultry confined animal feeding operation (CAFO) is one of many to spring up in eastern Oklahoma in recent months. The ongoing land grab coincides with the planned construction of an upgraded Simmons Foods poultry processing facility 25 miles away in Gentry, Arkansas.

In a way, noting had changed. With the same brand of disrespect, callousness, and force that their ancestors were subject to 1,200 miles and two centuries before, the people were forgotten. There was no public notice given about the CAFO permit or the slated use of their homeland. The message was clear: the CAFO was coming.

“Me and my neighbors had been seeing bulldozers and we learned it was for chicken houses. They were preparing to clear the path on 60 acres near Spring Creek.”

Pam’s 160 acres of land, which has been in her family for more than 100 years, touches the boundary of Spring Creek. The waterway boasts some of the cleanest, most pristine water in Oklahoma.

“If they kill this creek, it’s over.”

Pam, who works protecting Native American women’s rights, did what she does best — she got active. She started by getting the word out, messaging members of community and setting up a Facebook page for the Spring Creek Guardians group.

“We organized people and went after the leaders and representatives. We hired an attorney and wrote a cease and desist letter and we did get some people to step up and caused enough noise within 2 weeks to halt things.”

This was serious business. Pam and her neighbors understood what they would be in for if the factory farm came to their land. They had witnessed the harsh experiences of neighbors who suffer under the negative impacts of factory farms every day — from having their air choked with odors from large manure lagoons to watching their precious water resources being used and abused by the industrial-sized operations. And it was the water issue particularly that created heavy concern for Pam and the Spring Creek Guardians. CAFOs in neighboring communities have bben allowed to self-monitor their water consumption. Thoughts turned quickly to the survival of their community and their traditions.

“They are going to take all the water. They don’t have to put casings on the wells and they are sucking groundwater. Our wells are dried up. We all need water.”

The power of public action was immediate. The community’s objection to an intrusive and unwanted poultry CAFO invading their sacred land galvanized the Cherokee community. It made plain that yet another destructive effort was being imposed against the Trail of Tears descendants. Moving quickly, the Cherokee Nation closed on the purchase of the land earmarked for the massive poultry house operation, protecting and preserving Spring Creek and God’s Acre.

“It is citizen’s outcry that brought in the regulators and the Cherokee nation bought the farm. The Nation stepped up. The cemetery holds our family. It was really important to all of us Cherokee people.”

While Spring Creek was spared from a poultry CAFO and all the ills that it would bring to the area, Pam knows the potential for a new fight is always possible and that her community has to remain vigilant.

With the battle won, the war continues. Pam for one refuses to back down.

“Everyone told us we wouldn’t win. I refuse to have that attitude — and will continue to fight.”