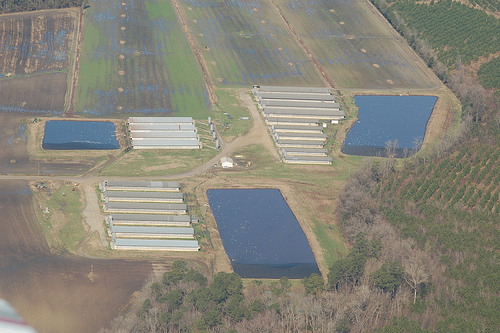 On environmentally sustainable family farms, animal waste is used to improve soil fertility and add essential nutrients. CAFOs, however, attempt to dispose of vast quantities of animal waste on limited amounts of farmland. This over-application of waste pollutes our water, soil, and air.

CAFOs generate massive amounts of waste. According to the U.S. Department of Agriculture, CAFOs produce 500 million tons of manure annually. This staggering number is three times the amount of sewage produced by humans in the U.S. But unlike cities, CAFOs do not treat the sewage they produce. Instead, they dump animal feces, urine, and antibiotic-laden waste into gigantic open-air lagoons until they can spread it onto neighboring fields. 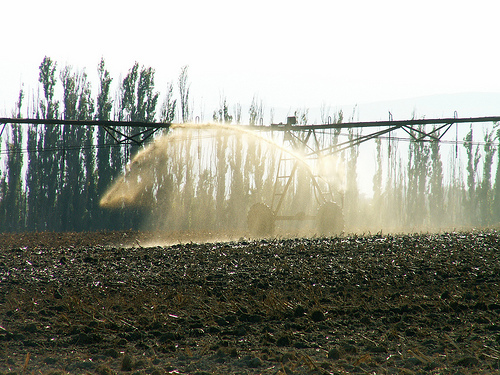 While festering in these lagoons, liquefied animal waste often leaches into the groundwater, contaminating neighboring wells and rendering water unsafe for humans and farm animals. When CAFOs spread their waste onto fields, that waste frequently runs off into waterways. The resulting overload of nutrients causes rapid algae growth, which depletes the water of oxygen and kills large numbers of fish and other aquatic life.

Waste runoff also transports dangerous fecal bacteria, such as E. coli, into waterways and wells. For example, a heavy rain caused manure to infiltrate a municipal well in Walkerton (Ontario, Canada) in May 2000. Even though the water was being chlorinated, the amount of E. coli overwhelmed the treatment system. Seven people died, and more than 2,300 people became ill due to drinking tap water.

In addition to contaminating water, CAFO waste pollutes the air. Liquefied animal waste emits 160 known toxic gases, including hydrogen sulfide, a deadly gas with the characteristic stench of rotten eggs. Small droplets of waste also become airborne, carrying a plethora of microorganisms and pathogens into surrounding communities. For example, the Excel Dairy CAFO in Minnesota emitted so much hydrogen sulfide that the Minnesota Department of Health recommended neighbors evacuate the area. After years of violations, the Minnesota Pollution Control Agency closed the CAFO in 2009, but the lagoons full of manure remained.

Environmental Groups That Support Our Work

Center for Race Poverty and the Environment
Since 1998, San Joaquin Valley residents and grassroots community organizations have stood up and fought the largest and most polluting animal factories taking over rural communities. CRPE represents those communities struggling against the powerful and well-financed California dairy industry. Acting on numerous requests from client communities facing dairy CAFOs and their associated flies, water pollution, air pollution, and unpleasant manure odors — CRPE set up its Dairy Project in 1988.

Midwest Environmental Advocates
MEA protects water quality and quantity by reviewing and commenting on state wastewater permits, advocating for state regulations on how manure is applied to farm fields, advocating for state protections regarding groundwater pumping, and supporting local groups demanding that public water stays out of private hands.

The Izaak Walton League
Founded in 1922, the Izaak Walton League is one of the nation’s oldest and most respected conservation organizations. With a powerful grassroots network of more than 250 local chapters nationwide, the League takes a common-sense approach toward protecting our country’s natural heritage and improving outdoor recreation opportunities for all Americans.

Putting Factory Farms to the Test: A Guide to Community-Based Water Monitoring
https://environmentaldefence.ca/reports/put-factory-farm-to-test.htm

Stopping CAFO Pollution  A Tool from the Sierra Club
https://www.sierraclub.org/michigan/how-stop-approval-new-cafo

A Citizen’s Guide to the Regional Economic and Environmental Effects of Large Concentrated Dairy Operations [pdf]
This guide was created to help citizens and environmental groups evaluate applications for industrial dairy operations.

A Short Analysis Of: Manure Management for Water Quality: Costs to Animal Feeding Operations of Applying Manure Nutrients to Land [pdf]
This report is a critique of the U.S. Department of Agriculture study on the costs of manure spreading under the new EPA requirements.

Iowa Concentrated Animal Feeding Operation Air Quality Study
A comprehensive analysis of the impacts of factory farms on air quality. Find key facts from the report in this fact sheet.

And the Waters Turned to Blood by Rodney Barker