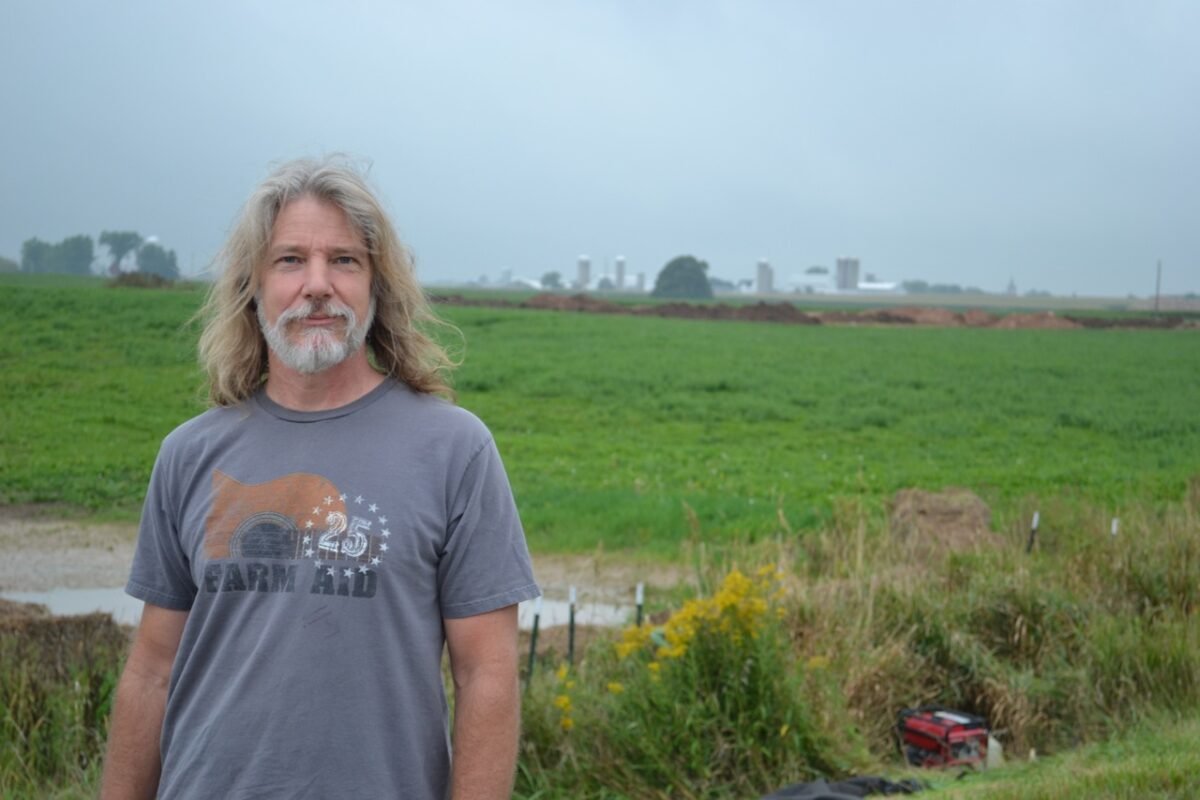 LYNN UTESCH AT A CAFO SITE WITH A PERMIT UNDER CHALLENGE IN LINCOLN, WISCONSIN.

Lynn and Nancy have an operation of their own: a 150-acre grass-fed beef farm based on a rotational grazing method they have relied on for more than two decades. It’s resulted in healthy cows who have lived well into their teenage years, but the Uteschs’ way of life has come under threat as more and more of the mega-dairy operations surrounding them begin to clamor for manure spray-irrigation permits.

The Uteschs are part of a group of Wisconsin citizens fighting a permit that would allow CAFOs to spray manure every day for 8 months out of the year.

In a county with so many mega-dairy operations, that would mean more than just foul odor. It would result in particulate matter; air emissions of ammonia and hydrogen sulfides, depressed property values and a wrecked tourism economy on the edge of Lake Michigan.

People would literally not be able to live outside. That’s how bad it could be. 

The permit is currently under study by the Department of Natural Resources and the University of Michigan, but Utesch has called the research into question. He said the study is only looking for a few pathogens, not the full range that can be found in the liquid waste from a factory farm.

They are not actually studying the overall impact of the spray irrigation.

As of now, only one farm has been allowed by the state to spray irrigate, but if the permit goes through, the cost-efficient method of spreading waste would increase exponentially across the Kewuanee County, causing irreparable environmental and economic damage.

This could actually ruin our community, it could literally drive our residents out of their homes. People wouldn’t be able to do the normal recreational activities families in the countryside do: have a cook-out, go fishing. It would literally be ruined by this practice, due both to the smell and the flies and the odors, not to mention the devastating health effects that are not understood at this point in time. 

The Uteschs run an appropriately-named Guardians of the Field Farm  in Alaska, Wi., just outside of Kewaunee. They are both lead organizers of Kewuanee Cares, a group of citizens who are opposing the permit.

Utesch said that Kewuanee CAFOs are homegrown,  previously small family farms that have expanded, largely in the last five years. What used to be integral parts of the community and the landscape have now turned against both.

As for the farm in Alaska, the Uteschs use rotational grazing, which they fell into originally by necessity when they had a farm on Washington Island with no access to grain. It was prior to the grass-fed  movement, but Lynn was surprised to see just how well it worked. His healthy soils absorb more water and nutrients, which leads to more nutritional value in the meat and eliminates the need for chemicals, pesticides and steroids. Beyond that, all of the manure produced by the cows stays on the property.

We don’t have to store it or ship it someplace out. It’s very biologically alive, which is great because it breaks down very rapidly. We actually have dung beetles on our farm, nature’s recyclers. 

The dung beetles take care of all the manure, and Lynn is quick to point out that they wouldn’t be able to survive if he was spraying chemicals.

The only way you can survive and be truly sustainable in farming is if you create those symbiotic relationships. That actually goes between our soils and plants, plants and animals, animals and humans. We’re all interconnected. We all eat the same things. 

On the Guardians farm, the cows choose their own food. Lynn said they know what they want, and when they want it, so he offers them a bounty of native grasses to graze on. He said that even the most advanced computer model can’t ration a cow’s food or balance its nutrition better than they can do themselves.

Cows are far more intelligent than we have ever given them credit for,  he said. They know exactly what they need and they will go find it on any given day. It’s amazing, and they teach their calves the same thing. 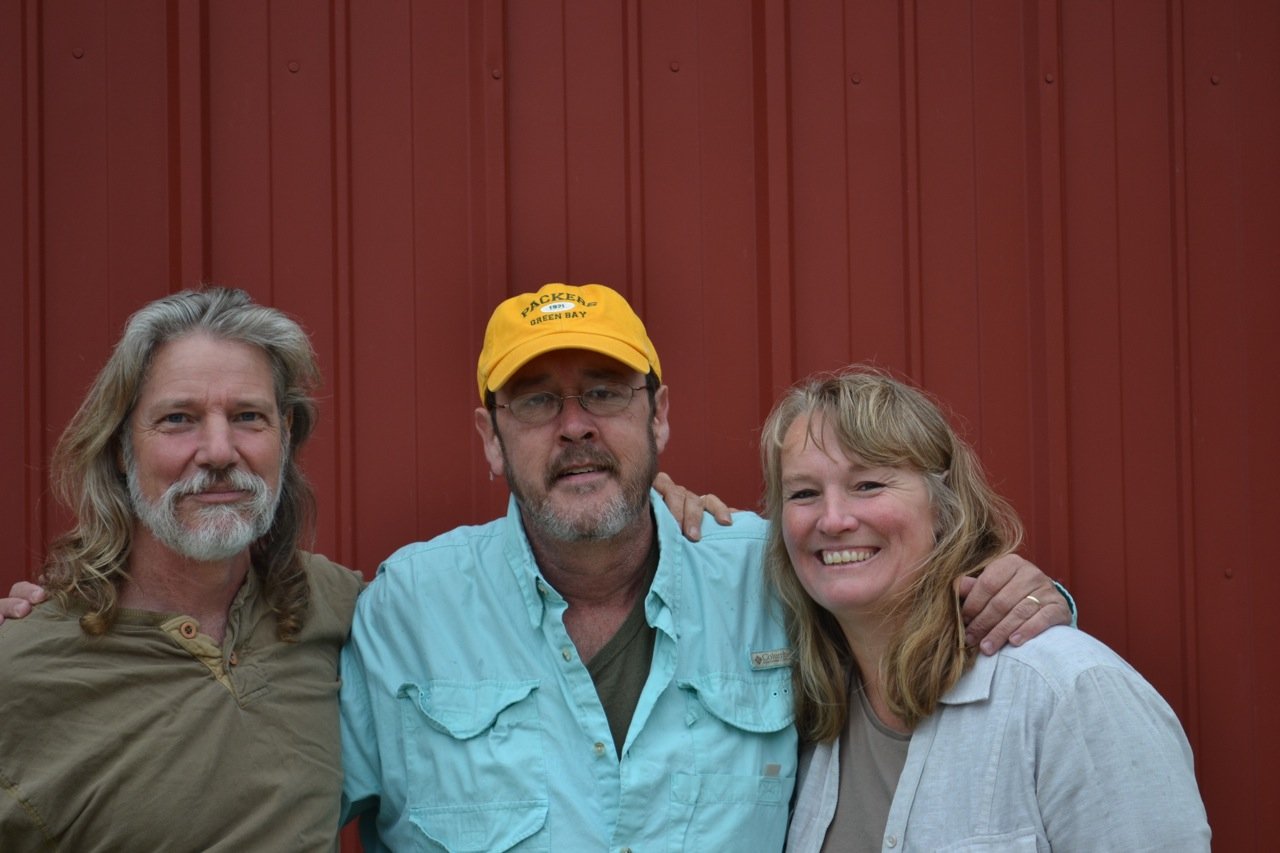 Lynn would like nothing more than to focus on his cows, but a lot of his energy lately has gone to protecting Wisconsin communities from water pollution, soil destruction, property devaluation, and a litany of other negative effects from factory farms.

Every day, it slaps you in the face.

As for the fight against CAFOs, Lynn’s biggest frustrations often come from public officials: politicians bought-and-sold and regulatory agencies that don’t enforce laws. But he still finds reasons for optimism in the trends of consumer demand and a shift in attitude toward food.

People are demanding that they want clean food and the industrial agriculture model is just not working anymore. People are going to demand change.