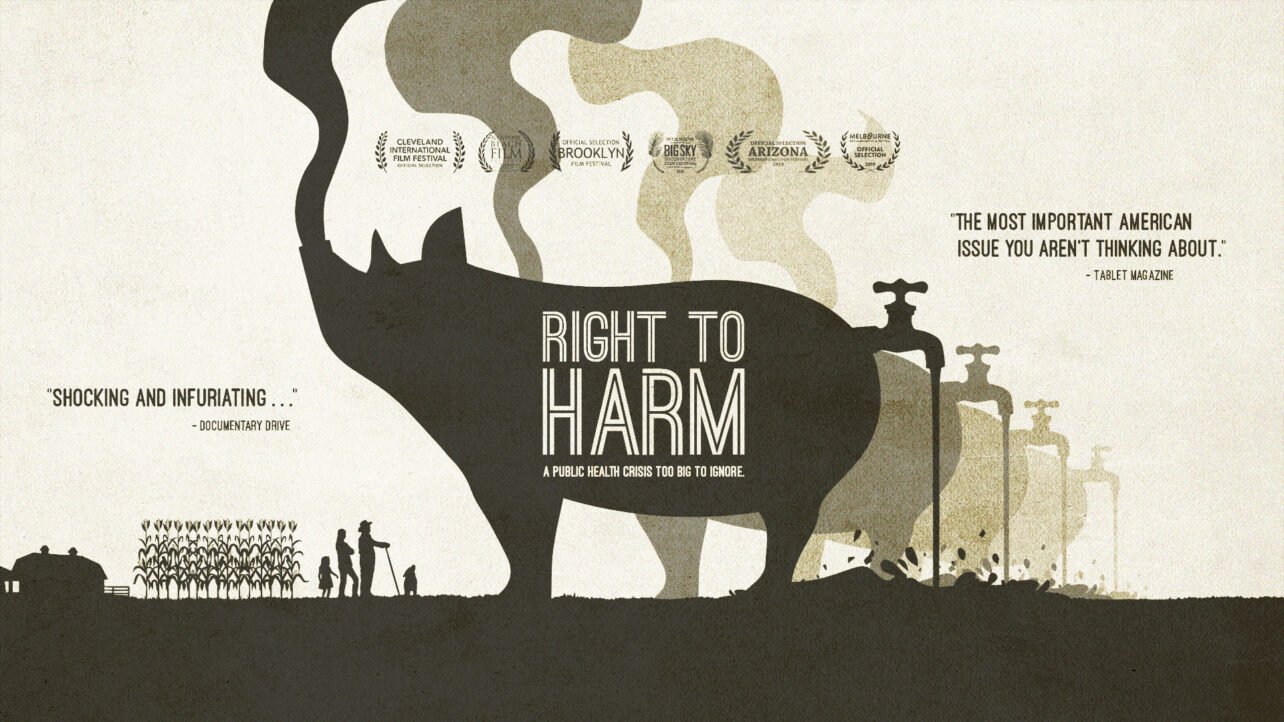 RIGHT TO HARM, a riveting new film exposing the public health impacts of factory farming across the United States, premiered nationally at the Big Sky Documentary Film Festival in February. Illinois Citizens for Clean Air & Water (ICCAW), the Socially Responsible Agricultural Project (SRAP), and Hourglass Films are pleased to announce the Midwest Premiere of RIGHT TO HARM in Peoria, IL.

Right to Harm, a new documentary by filmmakers Matt Wechsler and Annie Spiecher (SUSTAINABLE), exposes the public health and social impacts of factory farming on communities across the United States. The film tracks the tribulations and triumphs of five rural communities who are victims of the past 50 years of agricultural consolidation and the consequential laws that govern livestock production. Fed up with the lack of regulation, these disenfranchised citizens band together to demand justice from their legislators.

The film chronicles the failures of state agencies to regulate industrial animal agriculture. Known formally as concentrated animal feeding operations—or CAFOs—these facilities produce millions of gallons of untreated waste that destroys the quality of life of nearby neighbors. Farmers, mothers, scientists, and politicians share intimate stories of how their lives were forever changed by factory farming. Right to Harm is an enlightening exploration that questions whether citizens are entitled to clean air and water while examining the widespread political issues that stand in the way of nationwide reform.

ABOUT THE SPECIAL GUESTS:

Dr. John Ikerd abandoned industry beliefs after a 14-year career as a livestock marketing specialist. After the farm crisis of the 1980s he realized, “The farmers who were in the biggest trouble, were the ones doing the things we so-called experts were telling them to do.” In 2014, Ikerd developed the North American Report for the Food and Agriculture Organization of the United Nations for the International Year of the Family Farm. http://johnikerd.com/about/

Diane Rosenberg became immersed in the issue while editor-in-chief of a weekly community newspaper after CAFOs threatened her rural community in 2005. Rosenberg is also the President and Executive Director of Jefferson County Farmers & Neighbors, Inc. in southeast Iowa; co-founder of the Iowa Alliance for Responsible Agriculture (IARA); and recipient of the Sierra Club Leopold Group Outstanding Achievement Award for her work on this issue.

Matt Wechsler is an award-winning documentarian, sustainable food activist, and urban gardener from Evanston, Illinois. His passion for filmmaking started when he was ten years old and has blossomed from making short films to exposing social injustice around the country. His 2012 New York Emmy-nominated documentary, Different is the New Normal, aired nationally on PBS and was narrated by Michael J. Fox. His latest film, Sustainable, is now available on Netflix and received the 2016 Accolade Global Humanitarian Award for Outstanding Achievement.

ABOUT THE EVENT HOSTS:

Hourglass Films is a Midwest based film company dedicated to inspiring change in the heartland of the United States. Its stories focus on social and environmental injustice as well as the sustainability of our planet. The company seeks to provide perspective on political issues by exploring characters rarely seen in the media. Through empathy and morality, Hourglass Films strives to create lasting change in American culture in the hopes of providing prosperity for future generations. For more information, visit www.hourglassfilms.com.

MORE ABOUT RIGHT TO HARM: