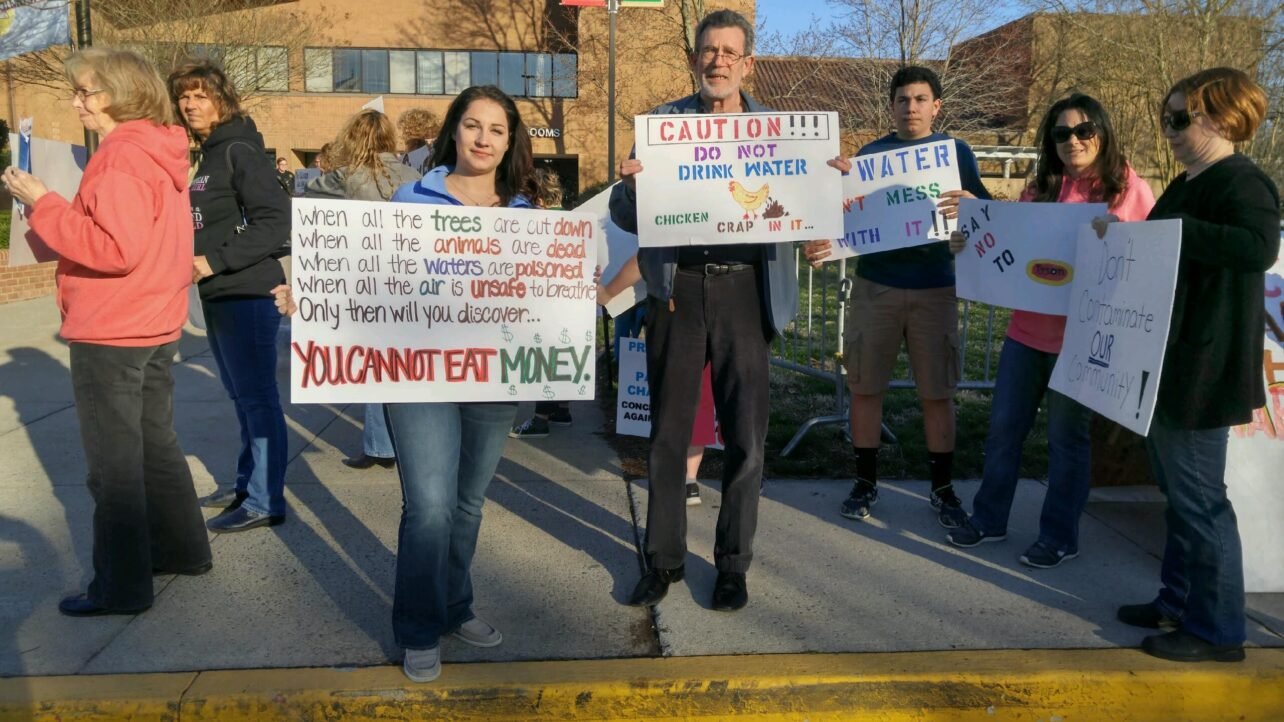 WICHITA, KS DECEMBER 13, 2017 Today, Socially Responsible Agricultural Project (SRAP) offers an enthusiastic congratulations to the residents of Sedgwick County, Kansas for their winning effort against the potential of a new Tyson Foods industrial poultry operation coming to their region. Under the banner ˜No Tyson in Sedgwick County’, concerned community members united in a spirited 58-day public information campaign that, once more, pushed Tyson and its planned $320 million industrial poultry complex out of a Kansan county.

On December 7th, the Sedgwick County Commissioners formally registered their non-support for incentives to attract Tyson to the county. A week slated to end at the Park City Library for a public education meeting on the negative community impacts of concentrated animal feeding operations (CAFOs) will, instead, include a victory gathering tonight in downtown Wichita to celebrate the community win.

Local Wichita Eagle journalist Kirk Seminoff offered a local perspective in his Pivot Point column on the motivation for Tyson and the County to end the pursuit:

But let’s be real, it wasn’t the incentives. It was the worry about water pollution, an odor, and the social impact of raising and slaughtering millions of chickens annually. Residents concerned about any or all of those factors came together in an impressive display of protest. 

It was just a short three months ago that another grassroots resident group in Tonganoxie, Kansas, supported by a coalition of concerned local, state and national organization, including SRAP, put a stop to Tyson’s designs on Leavenworth County. More than 1,000 residents attended the first public meeting in ˜Tongie’. The second meeting drew an estimated 3,000. Tyson moved on.

Organizing, showing up and sounding off is everything,  said SRAP Chief Executive Officer, Kendra Kimbirauskas. Sedgwick County changed direction on Tyson because concerned residents made their stand supported by science, informed by experience and delivered by committed residents. If recent events in Kansas are the beginning of a new normal, all of us in this fight welcome the change. 

The Sedgwick community group’s ubiquitous red and white block print yard signs, along with ˜No Tyson’ t-shirts, bumper stickers, Christmas light displays and even a huge ˜No Tyson’ message plowed into a nearby field sent a clear message. So did a very vocal downtown Wichita ˜No Tyson Rally’ and well-attended public meetings in Clearwater and Wichita that featured independent farmer/SRAP regional representative Chris Petersen and University of Kansas emeritus professor, author, CAFO community impacts expert and SRAP Board member Dr. Don Stull.

Supported by SRAP and local and statewide groups including Kansas Rural Center, Sierra Club Kansas Chapter, Peace and Social, Justice Center, Women for Kansas, the No Tyson group made its case. The Commissioners and the county’s business agency, the Greater Wichita Partnership, eventually took notice. Through public comments, media stories and public actions, the message was clear: the Tyson project was unacceptable to many community members, and with good reason.

In the end, the Commission’s decision to support quality of life for all in Sedgwick County was commendable.

Yet in the days after, the question is still being raised is it over? In an interview with local media, Lori Lawrence, the co-founder of No Tyson in Sedgwick County, summed up the feeling of many in the wake of the Commissioners’ announcement:

I’m cautiously optimistic. But you know, Tyson I just don’t trust, so I am not sure at this point to go, ˜yay, it’s over,’ because I know in other places sometimes it looks like they’re gone — and they do an end run and they come in. 

It’s this sense of insecurity that is a part of the overall damaging effect industrial animal operations can bring to a community. The threat of suddenly losing everything about a hometown that is wanted, appreciated and loved can sow a certain amount of doubt that the threat is truly is over. Even when governmental officials say it is.

Once you’ve lost that sense of certainty, comfort and trust, it’s hard to go back,  said Kimbirauskas. I’m sure the residents of both these heroic Kansan counties will be looking over their shoulder for a longtime to come. And, unfortunately, it’s possible they’re smart to do so. 

In an official statement, Tyson confirmed it is moving forward on its new mega-poultry operation in Humboldt, Tennessee, and that the company is not actively engaged  in Kansas. Yet, it also offered the unclear comment, ¦ we believe any speculation, conjecture or government action about a potential Tyson Foods facility in Kansas is premature.”

If Tyson comes back, SRAP will stand with Sedgwick County again,  said Kimbirauskas.