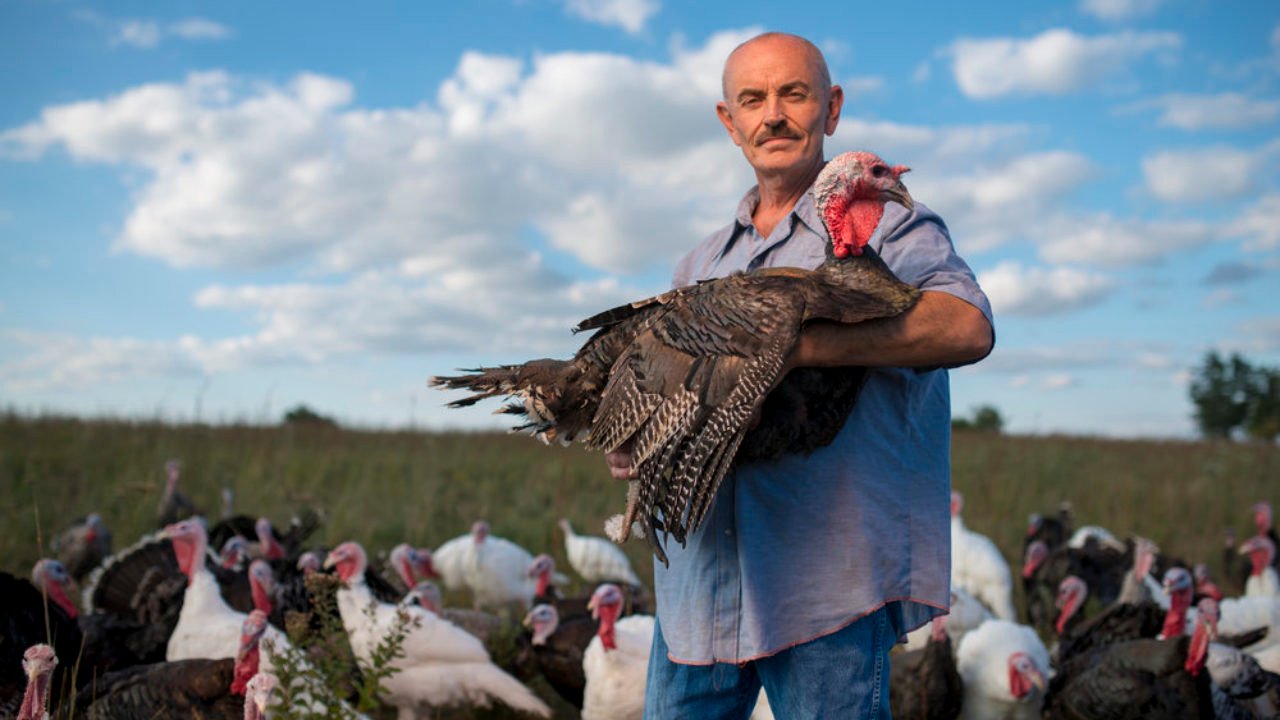 Welcome to our new series, Beyond Factory Farming, where we celebrate regenerative farmers throughout the U.S. who are working to build sustainable and local food systems.

BIRDS OF A FEATHER

At 71 years old, Frank Reese has seen a lot about farming change throughout his lifetime. A fourth-generation Kansas farmer, he remembers a time when family farmers practiced animal husbandry, which he says was as good for the producer as it was for the animals.

Frank remembers his father and grandfather, for instance, taking great pride in how they raised their chickens, cattle and turkeys. This sort of animal husbandry, he says, is nearly gone today.

Now the factory farming system, which negatively impacts surrounding communities, the environment, and the animals raised in industrial-scale operations, has all but replaced small farmers. “It’s a radical change,” he says. “How we eat has only been in existence for 40 years.”

Frank specializes in raising the oldest continuously bred flock of heritage turkeys on his farmstead, Good Shepherd Poultry Ranch, in Lindsborg, Kansas. These turkeys have been in Kansas for 103 years, and Frank has made it his mission to save the heritage birds from going extinct. Frank raises 12,000 turkeys, 6,000 chickens, 400 ducks, 200 geese and 200 Guineas a year on his 180-acre farm. They’re all pasture raised, free roaming, and antibiotic free.

“My main reason for the farm was to save many of these breeds and lines of poultry from extinction,” he explains. “The only way I knew how to do it was to put them back to work and introduce them back to the market again and to get people to taste them again. There are two to three generations of people who have no idea what real chicken and turkey tastes or even looks like.” Pasture-raised heritage birds, he says, are juicier and more flavorful.

Frank has been raising his heritage birds for the past 20 years, and, in doing so, he says he takes a traditional approach. Frank raises his birds seasonally to coincide with the birds’ natural mating and maturation cycles. In comparison, factory farming does not take the natural cycles of the birds into account, allowing today’s producers to raise birds year-round in huge industrial barns.

Also, unlike the poultry raised in factory farms, Frank’s birds are allowed to exhibit natural behaviors. They can roam freely and reproduce naturally. Factory farm-produced turkeys, Frank says, cannot reproduce normally and have to be artificially inseminated. Industrial broiler chickens get so fat that their feathers don’t fully cover their skin.

Unlike traditional animal husbandry, factory farming approaches the animal like a machine. “Factory farms are always thinking of new ways to tweak the cow to get more milk or get the chicken to grow 200 times faster,” he says.

Factory farming focuses on producing a larger bird, which results in the birds having many health issues, which they acquire due to their abnormal growth rates. “The birds can barely stay alive,” he says.

“One of the things I was taught as a poultry farmer is to go for balance,” he says. Frank explains three components that must be balanced: reproduction, skeletal muscle development and rate of growth and immunity. “If you choose one over the other, you sacrifice the others.”

When Frank selects his birds, he keeps the well-being of the animal in mind. He looks for birds with long legs, long keel bones and nice heavy bone structures. Unlike factory-farmed poultry, which are prone to disease, Frank’s birds are nutritionally dense.

Frank is one of the last remaining breeders of certified standard-bred poultry for commercial food production. “We are losing all the old breeders and losing the people that hold the knowledge,” he says. “If you ever lose them, it’s gone forever. We will never know what we lost.”

He hopes to preserve the past to build a better future, and he believes we can do better than our current factory farm system. “The only way to get rid of factory farming is to replace it.”