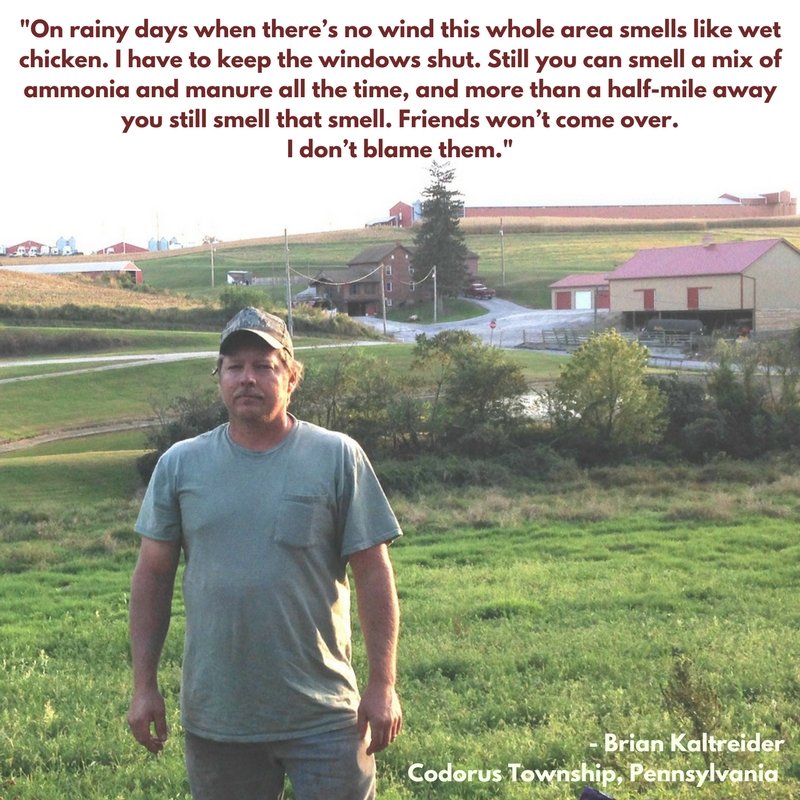 Brian Kaltreider had returned to his roots. Life in his grandpa’s rural hometown of Codorus Township, York County, Pennsylvania was the plan — complete with the long-awaited restoration of an 1864 log cabin Brian had in storage. There was plenty of work to do on the structure, including the addition of 150 tons of stone to build out the foundation. It was going to take some time, but it was worth it. Codorus Township was where the cabin belonged, and where Brian wanted to be.

It was also where Hillandale Farms, one of the nation’s largest corporate egg producers and distributors, decided it wanted to be, too.

Hillandale bought an existing egg-laying facility and egg-washing operation about a 1/3 mile away from Brian’s property and quickly expanded its size while backing the original owner to buy more and more land for growth of the business. There were times when manure mishandling at the original operation kicked up some odors from fields behind the house, but nothing like it was now. The larger Hillandale operation quickly disrupted lives, lifestyles and livelihoods in Codorus Township, and soon residents were outnumbered by the poultry population, 4,000 to 1.3 million. The sights, sounds, smells and signs of a major confined animal feeding operation (CAFO) quickly became unhealthy and unavoidable. A member of Codorus Township’s Board of Supervisors, Brian was getting some of the worst of it.

My workshop was so filled with flies at one point that I had it gassed. After a little time we went back in to clean up. By the time we were finished, we’d filled up a 5 gallon bucket of flies. Five gallons of black flies. It was unbelievable.

In addition to the swarms of flies that descended on the area, the living conditions created by the invasion of a million-plus chickens — along with their manure, airborne pathogens, feathers and dust — changed Codorus Township from the place that Brian returned to. The atmosphere thickened with foul smells. The electric sound of exhaust fans running 24 hours-a-day crushed the quiet of the rural landscape. Heavy truck traffic now rumbled along cracked and damaged country roads, disrupting driving and adding to the endlessly noisy scene.

But nothing was more obvious or worse than the odor.

On rainy days when there’s no wind this whole area smells like wet chicken. I have to keep the windows shut. Still you can smell a mix of ammonia and manure all the time, and more than a half-mile away you still smell that smell. Friends won’t come over. I don’t blame them.

Add it all up and Brian, along with many other residents of Codorus Township, has taken a beating at the hands of Hillandale Farms. Testament to that are the declining property values seen throughout the area.

But the loss of market value goes beyond the current harsh CAFO conditions residents endure each day. It speaks to the threatened future of the region. Codorus Township sits atop the U.S. Environmental Protection Agency-designated sole source  Seven Valleys Aquifer, the underground resource of well-water for the town and 3 other townships. The health of the aquifer is at-risk and endangered by the impact of pollutants associated with industrial animal operations.

Contamination of that aquifer will make public water impossible to get. Then where do you think we’ll be?

And yet even with the very real possibility of destroying the environment and the water quality for an entire county and beyond, Hillandale Farms is far from finished with Codorus Township. In the past year, the corporation presented a new plan to add an additional 1.7 million-bird operation, plus another egg-washing operation and a feed mill not more than the length of a few football fields from Brian’s property, giving him a front-row seat to the worst game in town. The scheme to make Codorus Township part of a major egg-laying production hub and disrupt the town completely is becoming clearer all the time.

It’s more than Brian was willing to accept. He resigned his supervisor’s office last fall to participate in and, eventually, lead the community fight to limit the ability of industrial animal operations to impact and expand in Codorus Township. It starts with confronting Hillandale Farm’s massive new push to more than double its local operations and the continued polluting of Codorus Township and its residents.

Years after he began, Brian’s restoration of the old frontier cabin is near complete. But the road to getting it done in a place that it belongs just got a lot harder.

In a lot of ways I feel like I’m fighting for something I can’t preserve anymore.