Hog farms were nothing new to Marj Van Winkle. But this was different. This was not farming. 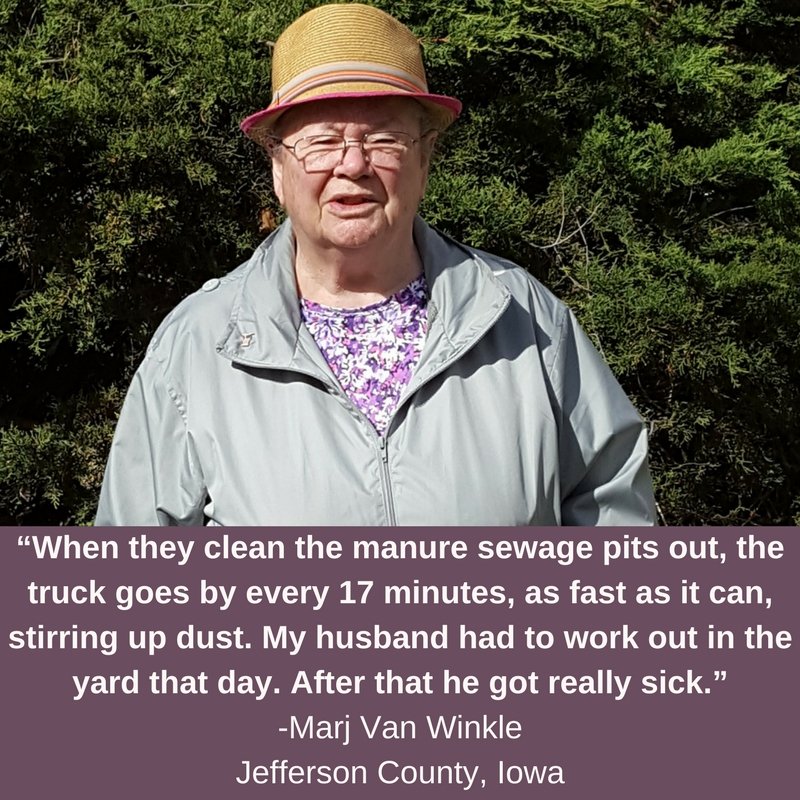 Marj, 77, and her husband Lyle, 83, have farmed 160 acres in Jefferson County, Iowa for half a century — just a mile from the industrial hog operation-saturated Washington County border. They inherited the land from Lyle’s parents back in 1957. In addition to raising two daughters, they also raised corn, soybeans and a small herd of pigs, as did many of their neighbors in the area. Hogs were a part of everyday family farming life. That is until livestock production consolidated into fewer and larger corporate operations in the 1990’s, leaving virtually every small local farmer without a market.

Change had come to southeastern Iowa.

As a school bus driver for 38 years, Marj witnessed how Iowa agriculture transition from traditional family farms to industrial animal production along her route through Washington, Jefferson and Henry counties. Long metal barn after long metal barn popped up across the countryside. Each sprawling barn housed hundreds to thousands of screaming swine; each generating thousands of gallons of manure that would be spread on the area’s cropland. The noise, the foul smelling air and the increased truck traffic on rural roads was beginning to create unnerving changes in the community. And the harsh reality for Marj and Lyle was that these massive operations were creeping closer and closer to their home and farm.

The thing is some of these hoggers we see here today running these industrial farms that are making life miserable were kids I used to drive to school. 

For a while that just seemed to be the way of things. It was unacceptable — but you just had to accept it. Then in August 2013, a neighbor called with a warning that changed the Van Winkle’s lives. It was hard news to hear. Yet another industrial hog confinement operation was coming, and this time just a mile away. It would become the ninth industrial concentrated animal feeding operation (CAFO) within a two-mile radius of Marj’s home. Her tolerance reached the tipping point.

That was just one CAFO too many. So we decided to do something about it. 

Joining forces with other community, state and national groups working to protect Iowa, Marj became one of the founding members of the Iowa Alliance for Responsible Agriculture. IARA is a citizens’ coalition that educates about the harmful impacts of factory farms and promotes a moratorium on more industrial animal operations in the already CAFO-burdened state.

We’ve got to convince the politicians that this is not agriculture. It quit being agriculture when they started putting them together by the thousands. Then it’s industrial. Working with IARA, the Van Winkles pushed back against the new 2,480-head operation planned for their neighborhood. They fought a good fight.
We managed to delay it for a year, but it got built — and boy does it stink. 

In the months following the operation’s approval, the Van Winkles have witnessed nothing but negligent management.

She routinely sees dead hogs stacked in small dumpsters outside the barns for weeks at times, while others decompose in a composting shed to eventually be spread with manure. Manure is flung everywhere — most of the time splattering into the air, not knifed  into the soil as it’s supposed to be by Iowa regulation. It’s even spread on the land of absentee owners without consent.

My vet has taught me to call it sewage. It’s not manure. Manure is in chunks, mixed with straw. You spread it out on the field and it’s good. This stuff is raw, untreated sewage. 

With so much wind hitting their property from the southeast, carrying with it hydrogen sulfide, methane and ammonia from the hog waste, Marj and Lyle can no longer enjoy the outdoors, let alone make plans for company. The stench clings to their clothes, the upholstery of their car — even their pets.

And more than the stink, it’s making them sick.

It started with the sewage semis. When they clean the pits out, the truck goes by every 17 minutes, as fast as it can, stirring up dust. My husband had to work out in the yard that day. After that he got really sick. 

The neighborhood cleanout continues for days: huge tractor-trailers speeding past at all hours and spreading on fields right up to the Van Winkle’s fence. It took weeks for the smell to fade, and Lyle’s respiratory issues worsened.
It gives me awful headaches. It’s made my husband sick all over. He couldn’t smell or taste food — wasn’t hungry. If these guys don’t quit, they’re gonna make it impossible to live out here. 
Despite the unbearable changes, Marj has stayed optimistic. She believes people are starting to make enough noise that county governments will be forced to pay attention.

I’ve been hauling politicians around. I’m in such a great place to show people what’s going on. From one point in Washington County along the tour you can see a mile in every direction, and you can see 19 CAFOs. 
Determined to shed light on the true horrors of CAFOs and the corporate pork production plaguing so many others in rural Iowa, Marj channels her energy and hope into the work being done through IARA.

We’re gaining on it. I mean, three years ago nobody thought it was a problem. Well now we’re pretty well convincing everyone that it is. 