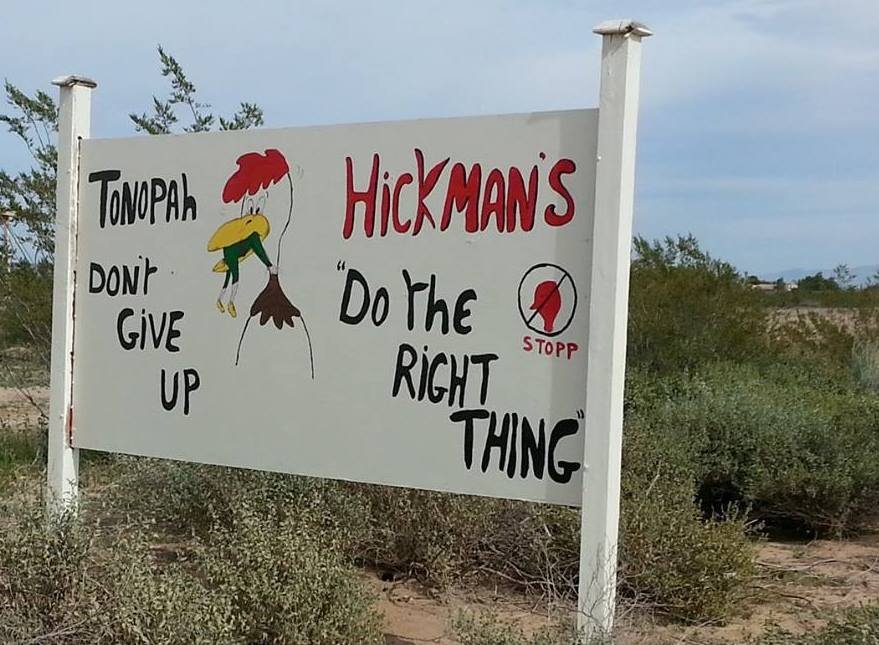 TONOPAH, AZ ”October 18, 2017 ”Hickman’s Egg Ranch Inc. has targeted individual residents of Maricopa County with a sweeping legal action to end all public challenges against the health, environmental and quality of life impacts of their industrial egg operations in the unincorporated population areas of Tonopah and Arlington. Most of those residents served with court documents are members of STOPP Inc. (Save Tonopah Oppose Poultry Plant), the local citizen group that has rallied to lodge public health and safety complaints with Maricopa County authorities against the Hickman facilities since 2014.

STOPP has been supported in the multi-year fight by Socially Responsible Agricultural Project (SRAP), a nationally-recognized expert on the community impacts of industrial animal operations, and a family farm advocate.

A Verified Complaint for Declaratory Relief — Case Number CV2017-012377 — was filed September 14th in the Superior Court of the State of Arizona Stinson Leonard Street  LLP on behalf of Hickman’s. It was served on 24 Maricopa County residents, including Dan Mack, chairman of STOPP. In the Complaint, Hickman states its massive egg-laying confined animal feeding operation (CAFO) currently housing more than 4 million laying hens operating within a few hundred feet of Tonopah residences, businesses and natural hot springs is engaging in farming  and wants the court to declare it is operating in conformity with federal, state and local laws.  This despite acknowledged high levels of ammonia measured in the community and constant episodes of dried fecal matter, feathers, dust, dander and allergens being blown into resident homes by massive fans on the compound of metal-shed henhouses.

The Hickman brothers want to permanently gag the residents of Tonopah and remove our basic right to protect ourselves,  said STOPP’s Mack. And not just now. For all future operating on these huge animal factories. They want it all, and it’s not surprising that they have gone this far. 

The egg production giant — whose products are sold under names Egg-Land’s Best, Land O’ Lakes, The Farm’s Choice and Hickman Family Farms by national retails including Costco, Walmart, Safeway, Albertson’s, Fry’s and Trader Joe’s — asserts it wants declaratory relief.  According to the Complaint, this would be a legal finding that their Tonopah operations are not a private nuisance;  are not a public nuisance;  and that the named defendants are not entitled to equitable remedies against Hickman’s including an injunction  and are not entitled to damages from Hickman’s. 

This is Hickman’s end-game, as it seems to be industry-wide with intensive animal production: remove all protective regulatory barriers and strip local citizens of their ability to hold them accountable for their environmental and community impacts,  said Danielle Diamond, Executive Director of SRAP. And it’s easy to understand why. The understood plan is that Hickman will more than double the size of the operation to approximately 8 million birds. This won’t be hard to do if no one has a way to oppose the very predictable impact it will have on local air, water, health and homes. 

Hickman’s Tonopah operation is slated to continue its expansion to a massive industrial compound of 28 laying houses, 2 processing plants and 4 industrial-sized egg production wastewater ponds storing more than 3 million gallons of contaminated liquid. It will be open to the environment and the community, threatening air quality, water safety, public health, the local economy and the use, enjoyment and value of surrounding properties.

As citizens, we need to oppose these unacceptable, unlivable changes to our community,  said Mack. The question has become, will we be allowed to? And that’s a scary thought. 

STOPP is a not-for-profit community organization working to protect the safety of their local community and the quiet use and enjoyment of residents’  property, as well as to encourage and maintain the financial health and growth of businesses in the Tonopah community.   More information can be found at www.tonopahstopp.com.

SRAP is a national nonprofit organization working in rural communities across the country on the front lines of factory farm expansion. SRAP provides no-cost engineering, technical, educational, organizational and communications support, assisting citizens in the protection of their homes and the preservation of responsible family farming and ranching. For more information, go to www.sraproject.org. ‹