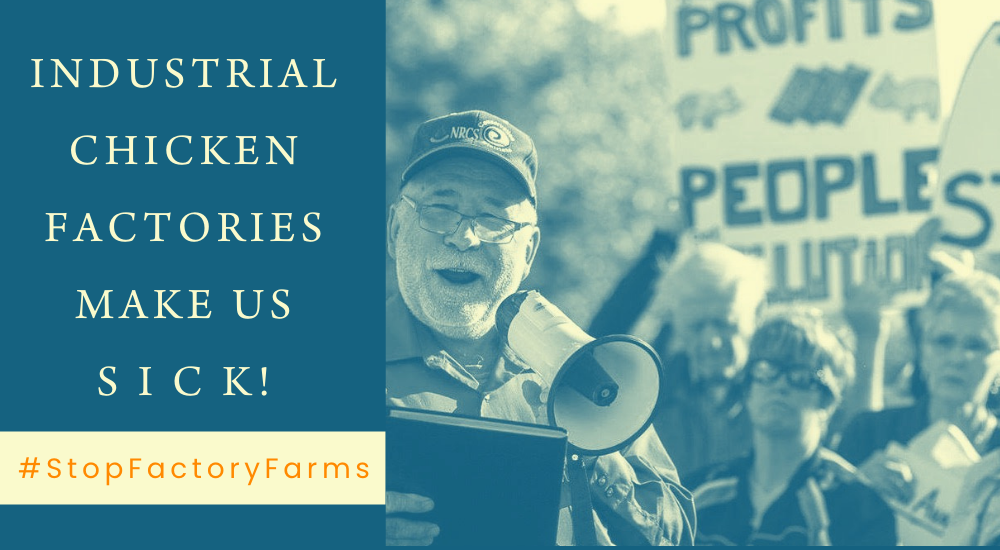 The following letter to the editor was written by former poultry contract grower and current regional representative of SRAP’s Contract Grower Transition Program, Michael Diaz. Michael and other SRAP staff are helping residents of Hardy County to oppose the construction of a mega poultry processing plant in Old Fields, WV. This letter was originally published in the Moorefield Examiner on October 6, 2021.

Click here to read the PDF version of the newspaper.

Letter to the Editor: How Industrial Poultry Farms Are Devastating Rural America

“You may choose to live in a world of fantasy if you like, my dear, but I am a realist.” —Ransom Riggs

Dr. Joseph Moritz’s Op-Ed a few weeks ago on large scale poultry farms in Hardy County, WV, seems to ignore the real-world impacts industrial poultry farms have on our families and neighbors. With all due respect to Dr. Moritz, what good is theoretical knowledge when one doesn’t really have real-world experience to ground theory on? This isn’t a discussion in a classroom; in matters like these, what we think as a community affects actual people and our very lives.

I have been a contractor for a poultry integrator in the past and am too familiar with the oppressive environment that contractors are thrown into. I agree with Dr. Moritz that age, retirement, competition, and fear of accumulating new debt are driving the traditional farming veteran out of the game.

However, a vertically integrated food industry isn’t filling the gap left behind by aging farmers, but instead is creating this gap by vertically integrating an entire industry so comprehensively that there is no space for the little guy to compete. Integrated poultry operations aren’t a solution to the decline of the farmer—they are very much the cause of the decline of the farmer.

The Moorefield processing plant may have the ability to process 2.2 million birds a week, and processing at or near capacity logically would create significant savings—true—however, the question is, who exactly is benefiting from these savings?

I can tell you with unfortunate and real experience who is NOT profiting from these savings – the farm that does the actual growing. The same family farms and farmers who form an integral part of the vertically-integrated poultry industry are the ones who take all the risks, own the debts, break their backs shuffling bucket after bucket of feed for chickens, and dedicate their lives to the well-being of these birds – these are not the people who profit. The integrators do.

And to the end users reading this article, let me promise you that you are not profiting from these savings either. The poultry and meat packing industries are riddled with price fixing schemes. One look at the number of price fixing settlements that have recently been in the news should reliably inform you that you are not number one on the integrators’ list of people to look after.

Heck, you aren’t number two or number ten. You don’t figure on that list at all. These guys care for one thing and one thing only—making money, and as far as they are concerned the farmers, the community, the animals raised, the air we breathe, and the water we drink can all rot in hell.

Another fallacy we can’t afford to ignore is the illusion of job creation in the community. Poultry and meat plant workers have remarkably high turnovers and often include refugees and undocumented immigrants who are treated as disposable assets. They have little freedom and voicelessly suffer inhumane conditions in a tyrannical and exploitative industrial food system.

If you really want to know what goes on inside these multi-million-dollar factories, don’t ask a high-level manager, talk to a janitor. Ask the men and women at the bottom, they’ll fill you in. These aren’t people pulling into their house on the hill in a new Chevy. These are folks who carpool, scrounge for every last dollar, suffer extremely poor living conditions and an even worse work environment.

The bottom line is that industrial poultry operations aren’t creating well-paying jobs that lift people up in society or give them access to the American Dream. They are exploiting people so corporations can continue to make money uninterrupted.

Most of Dr. Mortiz’s letter seems to be written from the perspective of someone who has never walked a 700-foot super house carrying buckets filled with dead chickens over and over again. By someone who doesn’t know what it’s like to be forced into mountains of debt by integrators who ruthlessly trap you into a system that has destroyed lives over and over again.

How is it good economics when you concentrate 20 super houses on one facility very likely owned by a family riddled with debt? Come on, people, we all know small business is what built America into the greatest nation known. Small and independent farmers fed this country, and fed it well.

Integrating different parts of the poultry business into one operation sure seems like it’s putting more people out of work than getting them working! Grandma always told me never to put all my eggs in one basket—and I think it was the best advice I’ve gotten in years!

The economy, the environment, the health of our families, and rural America itself has been devastated by these very same industrial corporations. Why would we want these guys in our communities as our neighbors? They destroy our water, poison the air we breathe, and expose families to serious public health risks.

Can you imagine living a quarter mile from an operation with 20 mega houses that hold up to 1.3 million birds at a time and grow 8 million chickens a year? Add to that dilemma a short drive down the road, less than a mile to be exact, and you find another 15 mega house operation right along the same major highway. The stench alone would make the area unlivable for miles and the decline in water quality has serious health consequences.

The primary product for mega poultry operations isn’t chicken, it’s poop. Let’s face that reality. The question is—what does the waste of 8 million birds do to a neighborhood over one year?

Time and again, rural communities have learned, only too late, that the pathetic regulations these operations are subject to do not adequately protect us. They do not guarantee the safety of our water, of our air, and the health of our loved ones. Instead, they aid corporations and their profiteering schemes at the expense of the rest of us.

The truth is mega meat factories do more harm than good for a community. We have long suffered the tragic disintegration of rural America. We need to wake up. Community and culture is what gives us identity, it tells us and others who we are.

Our neighbors are important because we share our homes and lives with them. It is through precious relationships with land, tradition, and community that we can feel that we are in a place called home. So much has already been taken from us, and continues to be taken still by corporations and the wealthy few.

We have a responsibility to ourselves, to our children and to each other. We must protect our homes. We must work together to recreate the America in which the small guy mattered, where families matter. Where rural America is a lush and green landscape filled with the laughter of our children and not this wasteland of animal poop. We still live in a great country.

Our founding fathers made sure we have all the tools we need to protect ourselves from corporations who come into our communities and rob us of health, wealth and vitality. We can use these tools and work together to save our own communities from the greed and avarice of corporations.

This letter was originally published in the Moorefield Examiner on October 6, 2021.