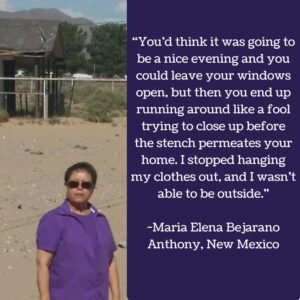 Maria Elena moved to her home on the northern edge of Anthony, New Mexico in the seventies. Her kids enjoyed being outside and playing in the yard – doing the type of things that kids like to do.

I began to notice the kids would be playing outside, and I could see a cloud come over the property, especially when we had an east wind. I started to notice an obnoxious amount of flies and a horrible odor too. 

Maria Elena and her family had unknowingly settled at the southern point of a growing series of massive industrial livestock operations along Interstate 10 in New Mexico. The 10-mile stretch of road would eventually be ground zero for 13 consecutive dairy complexes earning the nickname Dairy Row .

These factory farms, also known as concentrated animal feeding operations (CAFOs), confine hundreds to thousands of cows in barns and bare feedlots as far as the eye can see, stockpiling manure — both liquefied in open pits and heaped into huge mounds — to spread on cropland as fertilizer.

The nearest of these dairies grew to be less than 500 feet across the highway from Maria Elena’s house.

As the facility expanded in the 80s and 90s, life on the Bejarano property became rougher by the day. Swarms of flies covered their doorways. Dust stirred up by constant truck traffic choked the atmosphere. There was the incessant mechanical buzzing and clanking from the farm equipment with blinding headlights shining through their windows at all hours of the night. And if the lights didn’t keep the family awake, the odor from the millions of gallons of cattle manure did

You’d think it was going to be a nice evening and you could leave your windows open, but then you end up running around like a fool trying to close up before the stench permeates your home. I stopped hanging my clothes out, and I wasn’t able to be outside. I stopped doing a lot of stuff because of the stench. They kept adding and adding; I didn’t know I could do anything about it. I just thought I had to put up with it. 

It wasn’t until 2006, when the New Mexico Environment Department (NMED) opened up five of the facilities’ groundwater discharge permit renewals for public comment that Maria Elena finally decided to speak out.

We got some people together and we went to the meeting. I was very naive… I did speak up thinking it was regarding my concerns, but discharge permits were only for groundwater. Technically, they were okay, they were complying with environmental rules at the time, so there was no chance of doing anything. After that we just thought well, oh well. What can we do? 

Behind the scenes, however, other state and national groups were beginning to rally on behalf of New Mexico’s groundwater, which registered alarming amounts of nitrogen pollution due to the tremendous amount of animal waste being generated. The NMED assessed that between 60% and 70% of the dairies in New Mexico were contributing to the contamination, meaning one of the state’s top money-making industries was poisoning the primary source of its citizens’ drinking water.

In 2009 the state initiated a rulemaking process to create groundwater discharge regulations specifically for dairies. Maria Elena was one of two citizens appointed by then Governor Bill Richardson as a public representative for the stakeholder group, which consisted of state personnel, academia, various organizations, and representatives of the dairy industry. This process brought her together with other citizens impacted by dairy pollution and allies in the fields of environmental law, social justice, sustainable agriculture, and public health. They formed the New Mexico Citizen Dairy Coalition, calling out the state’s lax regulations and speaking to the harmful effects of the industrialized dairy system.

As a vital member of this newly founded group, Maria Elena not only participated in the stakeholder meetings, but also gave public comment and testimony at public hearings, wrote letters, reached out to media, and helped organize others to communicate to lawmakers the need for adequate regulations. The rulemaking process continued for years, with the dairy industry playing a very active role in trying to write its own regulations. Ultimately the coalition’s efforts were rewarded with several of their proposed provisions being included in the new rule.

The last hearing we had in March of 2015 — it made me feel good. Like maybe, it’ll be ok. Maybe we’re making a dent. BUT, there’s so much more. There are so many communities going through the same roadblocks and putting up with so much. It’s kind of scary ¦ will this ever turn around? 

Meanwhile, Maria Elena continues to deal with the impacts of the factory farm daily.

Now that I know about the pathogens we’ve been exposed to in the air, I’m concerned what effect it has had or will have on my kids, and also the mental anguish it causes… Before my granddaughter was in school, I got a little pool for her thinking she could sit outside in the water. She got so upset because the flies were attacking her. It was a disaster. 

Equally disturbing is the discriminatory and oppressive nature of the industry that she sees taking advantage of communities like hers all across the country.

Why are these dairies always within poor communities where the knowledge of fighting legally or making our voices heard is not there? We are a very poor, Hispanic community, and some of them [the citizens] don’t even speak English. They [the people living there] feel like that’s a big barrier and they’re afraid because the dairies are a primary source of employment. 

She now directs her hope toward supporting the people who will work for real change in regulation.

The bottom line, I think, is our elected officials, at all levels, need to have more will to do what is right. By enacting bills, by enacting consequences ¦ they can give a fighting chance for these communities against the CAFO industry. If they had these facilities next to them, they wouldn’t stand for it. 

Though she admits that some of the technical and legal aspects of the work still go over her head, Maria Elena knows she has learned so much over the years. What she says she’s learned most? No voice is too small, and we all have a role to play in this fight for the future of our communities and our resources.