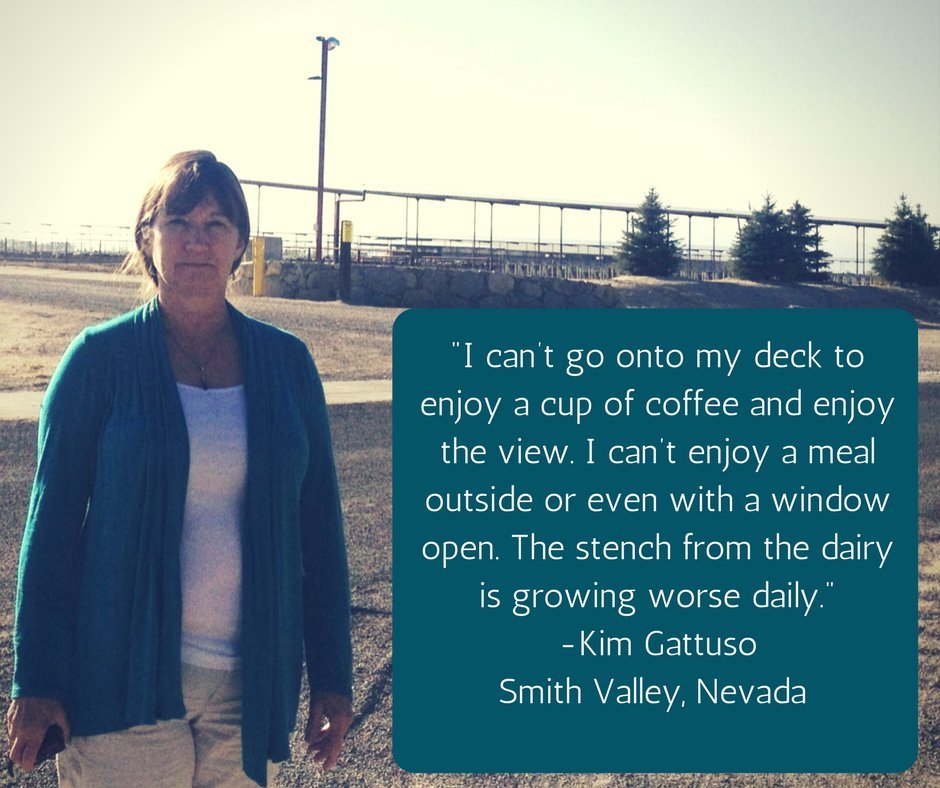 Just 150 feet from her front porch, the lights fired up, the noise began and life in Smith Valley has never been the same. It was far from what Kim Gattuso expected when she moved to Nevada’s rural Smith Valley, about 85 miles southeast of Reno, nearly 20 years ago. It had everything she was looking for — a wide-open landscape, peace and quiet, and the sort of natural surroundings that most everyone would expect from a rustic setting so far from the traffic and congestion of city or suburban living. But since May 2015 — and even before that as construction on a new mega-dairy built by California’s Vlot Brothers Dairy — that idyllic piece of land she worked on and cared for has faded.

Many days I have to hurry to feed my livestock because the sewer stench assaults my senses. I can’t go onto my deck to enjoy a cup of coffee and enjoy the view. I can’t enjoy a meal outside or even with a window open. The stench is growing worse daily.

Beyond the overpowering odors, that sense of well-being that comes from rural life is gone. Kim’s days in Smith Valley are spent listening to workers yell and curse at the growing number of cows trucked in for what will eventually be an industrial-sized dairy housing more than 7,200 animals. The constant rattling and revving noises of large trailer trucks hauling feed assaults the ears and fills the lungs with diesel exhaust that is so out-of-place on this landscape. The beeping sound of truck back-up alarms at all hours have taken the place of warm winds through the trees during the day and low cricket chirps at night.

Many people will have a quiet evening. They’ll be able to sleep in a quiet environment. That’s quite a contrast to what some here in Smith Valley live with now. We have to deal with industrial noise and industrial floodlights shining into our windows from what I call an industrial milk production facility right within sight of our homes. Not to mention the stench of the combined urine and feces of thousands of dairy cattle crammed on dirt lots right next to our homes.

This degraded living situation, though, could quickly go from difficult and frustrating to dangerous and health-threatening.

If this is the case with the smell, the noise and the lights, how long will it take before my water is unsafe to use?

This isn’t something Kim wants to find out. And it isn’t lost on her that she was here first and that little to nothing is being done by her own state government to protect her from outside interests. In fact, what’s happening in Smith Valley in favor of the Vlot Brothers has easily brushed aside any reasonable enforcement of Nevada’s Division of Environmental Protection regulations that were put in place to protect citizens from risks like Kim is facing right now.

My neighbors and I watched this operation break the law from the beginning and continue to do so. Sewage lagoons were built prior to having a Groundwater Discharge Permit, yet so far no one in government has had the wherewithal or the motivation to do more than give a slap on the wrist, and placate the public by saying, We’re working with them to come into compliance. 

But compliance isn’t what Kim Gattuso is looking for. She wants the system to stand up for what is right and lawful, not to mention safe and healthy for the people and environment of Smith Valley. So far, though, she’s been met with resistance and, maybe worst of all, silence.

We tried to contact the owner from the beginning of the project with concerns. We were met with silence. The silence is now broken by the thousands of cattle and the accompanying cacophony of their associated activities. So it’s pretty clear — the message we’re getting is that harm done to others is acceptable collateral damage. My peace has been disrupted and my lifestyle is being destroyed.