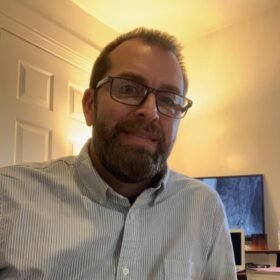 SRAP is pleased to welcome Donald Hutchinson as a GIS, Research and resources specialist!

Donald Hutchinson grew up in rural southwest Virginia where he spent his summers baling hay and cutting tobacco. For more than 20 years, he has been involved with environmental, animal welfare, and racial justice groups in various capacities, from organizing fundraising events to leading outreach efforts around racial justice issues. Donald has a BA in Geography and geographic information systems (GIS). In his graduate studies, he is exploring new ways to utilize GIS for social and environmental justice. His areas of study have included participatory GIS, scholar-activism, neoliberal governance, and race, racism, and whiteness.

Hutchinson will coordinate a new Socially Responsible Food & Farm Network, which will engage advocates and community members to not only oppose the construction and expansion of new CAFOs, but also to advocate on behalf of regenerative local food systems, environment and climate initiatives, public health awareness, and animal welfare principles. In his role, Hutchinson will prioritize organizing and support for diverse communities, with a particular focus on communities with various cultural and socioeconomic needs.

“To me, SRAP represents the intersection of advocacy for people, planet, and animals, and so I feel very fortunate to have been selected to help build the Food and Farm Network,” Hutchinson says. “As a new hire, my priority and focus will be to listen and learn from each of the organization’s team members, as well as from the community members SRAP serves. I hope to better understand the diverse needs of rural residents suffering from the impacts of industrial agriculture, while empowering them to advocate for socially responsible agriculture systems.”

Donald is currently residing in southern Maine, where he enjoys hiking, trail running, and cross-country skiing.