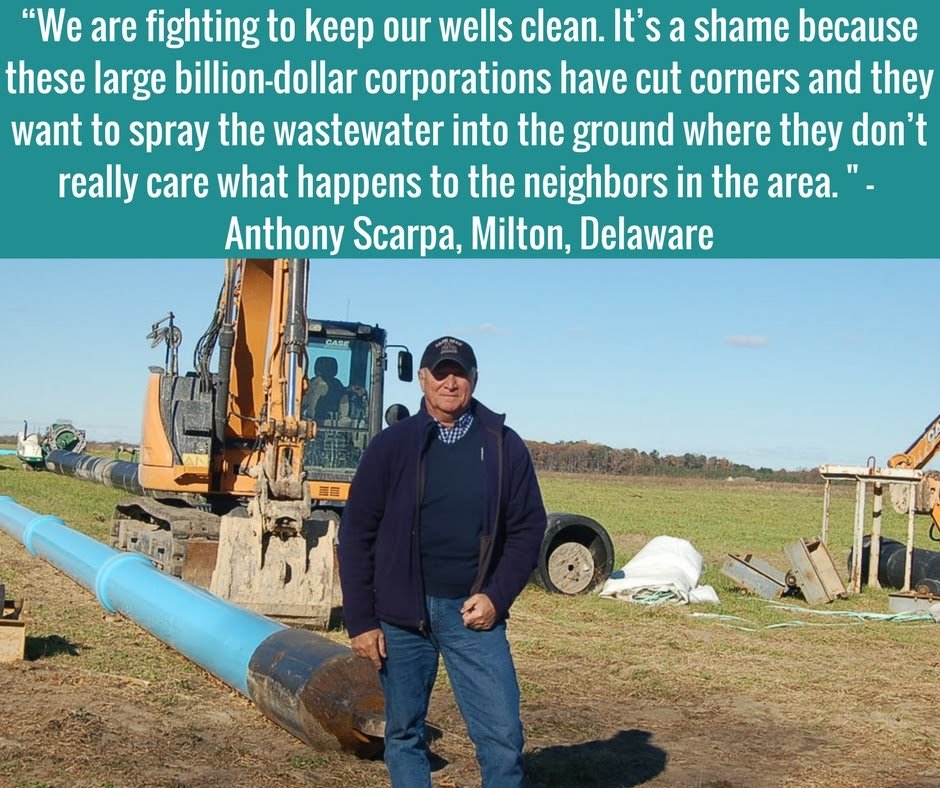 When Anthony Scarpa, 69, and his wife moved from New Jersey to Delaware to retire in November 2016, they never imagined they’d be moving their lives to the center of a public fight to protect their water and health from the corporate interests of a concentrated animal feeding operation (CAFO) and a water treatment facility. Yet that’s exactly what has happened in a messy saga that continues to unfold, pitting the health and welfare of Milton, Delaware, residents against the long-term impacts of an industrial poultry operation that threatens their health, their air and water quality, and the property they worked so hard for.

As a retired real estate broker, Anthony was immediately attracted to Milton’s rustic scenery, with its open farm fields and woodlands. It reminded the Scarpas of the small town they lived in back in New Jersey. They bought a lot and began building their dream home a place where they could enjoy their retirement in the kind of peace and health that only rural town can offer.

But that sense of happiness was short-lived. The Scarpas’ quiet retirement plan was soon shaken up by a dirty secret lurking in a vacant 74-acre parcel of land located near their new home. Anthony did his own research and found that Artesian Resource Corporation, a large wastewater services corporation, had an existing 2006 conditional use permit for the site. It was for a wastewater treatment facility to be used by a once-planned 3,700 homes residential community. That community never got off the ground, and it left Artesian with a 74-acre site and no customers to serve. This was news to the Scarpas.

When we bought the lot and built our home, none of that was ever disclosed to us by our realtors or builders. 

Enter Allen Harim, a major Korean poultry corporation that currently operates massive chicken processing plants in Maryland and Delaware. The company has repeatedly violated water quality standards in Harbeson, Delaware, and was fined heavily due to wastewater discharge violations in Maryland. Allen Harim needed somewhere to dispose of its vast amounts of CAFO wastewater — and Artesian needed a customer for its approved wastewater facility yet to be built.

The dirty dealings between Harim and Artesian came as a shock to Anthony.

If we knew back a year ago what we know now, we never would have moved to Delaware.

In May 2017, Artesian submitted an amended permit application with plans to build a 90-million-gallon wastewater storage lagoon on the vacant lot in Milton. They were also going to install eight miles of pipes along Routes 5, 9 and 30 to carry wastewater from the Allen Harim facility.

And if that wasn’t bad enough, the stored wastewater would then be sprayed on agricultural fields around Milton. It was a nightmare scenario for the Scarpas. Their dream home was less than one mile away from the storage lagoon — and short of a quarter-mile from the spray fields. Their thoughts turned immediately to the risks the industrial hazard would bring:

It will affect our health and quality of life.

Anthony and his neighbors couldn’t sit idly when their quality of life was at stake. They joined forces to organize the community group Keep Our Wells Clean, and when a public hearing was held on July 27, Anthony and nearly 100 other local Milton residents showed up to voice their disagreement and rally for a safe and healthy future for their community.

We’re fighting to keep our wells clean. It’s a shame because these large billion-dollar corporations have cut corners and they want to spray the wastewater into the ground where they don’t really care what happens to the neighbors in the area. What’s more upsetting is the state agency tasked with protecting public health, DNREC, time and time again sides with the polluters and not the public.

Through his community organizing work, Anthony discovered the disappointing and dangerous reality that Delaware has a less-than-clean record when it comes to water quality.

It’s like the Wild West here where they don’t require corporations to dispose of their effluent responsibly. Instead they spray it onto fields and inject it into the ground and it finds its way into the Delaware Bay and residential wells. They seem to be more interested in attracting these poultry farms. It’s gone from the small farmer to the big farms with 6-7 chicken houses which go to processors like Allen Harim and Mountaire.

It has been a harsh truth to swallow for the Scarpas. Had they known about Delaware’s dirty reputation, they never would have made Delaware their permanent home. And now they feel like they have few good options.

It’s our retirement home and the chances of selling it and getting our money back is not possible. It’s not fair to people who work all their life and save up for their retirement home and never get its value back because of what is going on environmentally in their neighborhoods. For us to just pick up sticks and move again, it’s not easy.

While Anthony and his group have continued the fight, they are still in for a long battle as Delaware officials approved the Artesian/Allen Harim construction permit in early November. But that will not be the end of the story for the Scarpas and their fellow members of Keep Our Wells Clean. The community will continue to put up a fight.

It’s a battle worth having because states have gotten away with dumping stuff that has affected people’s health. Business trumps health here in Delaware. I think it always has. The message that comes through loud and clear from Delaware’s politicians and state agencies is Big Chicken Makes the Rules.

Anthony Scarpa has every intention of changing those rules.